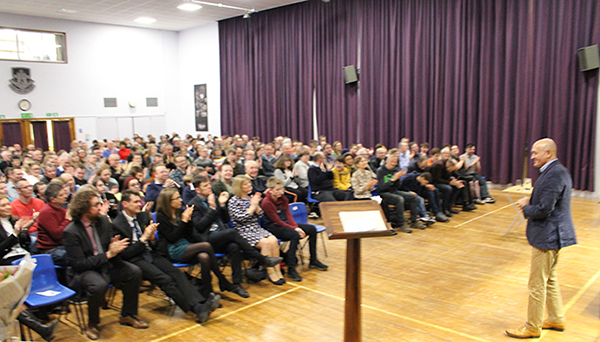 Jim Al-Khalili, scientist, author, broadcaster and Professor at the University of Surrey, mesmerised and entertained a sell-out audience at the second George Abbot Onslow Lecture series.

A familiar voice from Radio 4’s ‘A Life Scientific’ Professor Al-Khalili gave a brief history of gravity and how our understanding of it has changed: from the Ancient Greeks, who believed everything revolves around the earth, via Newton’s Law of Gravitation, to Einstein’s theories, developed early in the 20th century, which still hold force today.

In a lecture that took us from the very latest scientific research to time travel in Hollywood films, Professor Al-Khalili described black holes, Big Bang theory, spaghettification and much more. We learnt that time passes more slowly the further from the earth you are and that, just conceivably, time travel might be possible.

Thought-provoking questions afterwards confirmed that a fascinated audience had hung on every word. For those still pondering the mysteries of dark energy and worm-holes, Professor Al-Khalili had the answer: two Ladybird books he has written on gravity and quantum mechanics.

Proceeds from the evening will go to the Renaissance Project, a major fund-raising initiative to renovate the school’s art facilities. The school is extremely grateful to Professor Al-Khalili for sharing his knowledge and enthusiasm.

This website uses cookies to improve your experience while you navigate through the website. Out of these, the cookies that are categorized as necessary are stored on your browser as they are essential for the working of basic functionalities of the website. We also use third-party cookies that help us analyze and understand how you use this website. These cookies will be stored in your browser only with your consent. You also have the option to opt-out of these cookies. But opting out of some of these cookies may affect your browsing experience.
Necessary Always Enabled

Any cookies that may not be particularly necessary for the website to function and is used specifically to collect user personal data via analytics, ads, other embedded contents are termed as non-necessary cookies. It is mandatory to procure user consent prior to running these cookies on your website.